The Best Violinists of All Time 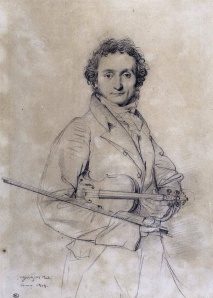 Paganini, by Ingres.
Courtesy of Wikipedia.

What makes a great violinist? Just like most things in life, it helps to practice a lot. Once you have gained enough confidence from your violin training, you should have a broad capacity for bowing, dynamics, sound and color. It may take years, even decades, but if you really love violin, you can start offering violin lessons of your own, and maybe even start composing and aiming to topple the big names, three of which are featured below.

Paganini is considered one of the best violinists of all time. Why? Because he was so well-practiced. Talk about violin lessons: Paginini used to play ten hours a day. When he died, many assumed he was supernatural, and thought he would have extra cartilage in his fingers; however, the cartilage in his hands was worn down, much like that in a marathon runner’s knee, from playing so much. He is known for having never missed a note on his Guarneri violin, made in 1743, and for playing his entire Caprices on one string. Here’s one of his most famous ones:

Vivaldi is another great baroque violinist, and today is probably the second most popular baroque composer only to Bach. In fact, Bach drew upon the bright melodies of Vivaldi’s concerti, of which The Four Seasons is a prime example, in his St. Matthew’s Passion, St. John’s Passion and cantatas. Bizarrely, despite Vivaldi’s fame while alive, after his death his work passed into obscurity. It was not until the 20th century that a resurgence in popularity for Vivaldi arrived.

Hopefully, listening to these amazing compositions will inspire you to continue with your NYC violin lessons, or to start them if you haven’t already!