The First Step in Becoming a Guitar God

Getting guitar training is the first step in becoming a guitar god. Well, after you buy a guitar. The next part, the key to getting really good at guitar, is practice. Guitar lessons offer a mentor and way to stay on track. Think of each lesson as a weekly test that will keep you determined to impress your teacher. Your guitar lesson instructor can correct any mistakes you may be making, and challenge you to learn harder songs and techniques. After that hour of guitar lessons, it’s on you to love your instrument and play every day, to prepare for next week.

Guitar Gods of the Past

To give you an idea of how past guitar gods have made reached the pantheon, look at Eddie Van Halen. He used to strap his guitar around his neck and sit on his bed playing for hours at a time. When other kids were going out to party, he was practicing. That’s dedication. Eventually he become one of the world’s greatest.

NYC guitar lessons are super helpful when you have questions about technique, when you think you’re doing something wrong, or when you want to learn a new song or style of playing. Sometimes playing really slowly, making sure you hit all the right notes, or making sure that your strum pattern is perfect and everything else is right is the best way to practice by yourself. Listening to your favorite guitar solos can inspire you to learn them, bringing out your love for music even more and making it easy to practice guitar for half an hour a day. You can find tabs for solos and your favorite songs online. Also try to listen to classical music, to appreciate the foundation for awesome riffs and sick solos. Eddie Van Halen was a student of classical piano before he ever picked up a guitar. Reading music can help too.

Stevie Ray Vaughan—a blues guitar god—didn’t know how to read sheet music. Then again, he also had cocaine and whiskey for breakfast during his later years—not exactly a role model. Some guitar gods reach their status through a natural amount of talent. Music theory is also important, and because of its difficulty, it’s a great subject to explore with your mentor during guitar lessons.

Another guitar great who played as much as he could was Jimi Hendrix. He couldn’t afford guitar lessons, since he was so poor growing up in Seattle, so he took guitar lessons from blues masters. Jimi is perhaps best known for how he used distortion so originally. He was also famous for doing crazy tricks while performing, like biting and smashing his guitar. Some people say that he was sloppy, that he would take tabs of acid and put them in his headband, so that while he performed his pores opened and he became high. But one night he was challenged to play sober, and he played the same way to a standing ovation. Because his hands were so big, he was able to use his thumb over the fretboard to fret the lower E string, thereby creating melodies that are otherwise difficult or impossible to play. Though this technique existed before Jimi, in the early days of blues guitar, it was probably he who popularized it.

Keep in mind that a lot of the guitar gods who didn’t take guitar lessons were troubled souls who often died young. Who knows—maybe it was easier for them to follow a path of destruction without a guitar mentor to guide them along the way. 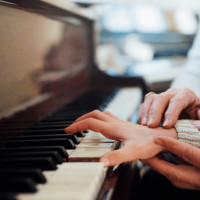 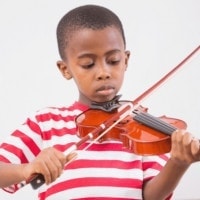 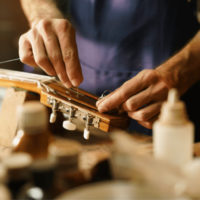