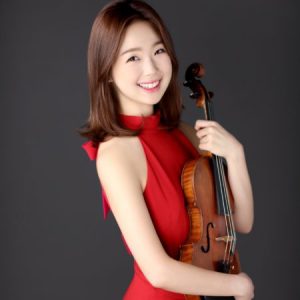 Violinist Aileen C., from Irvine, California, is a former Grand Prize Winner of the Music Center’s Spotlight Award, with a performance of the Tchaikovsky Violin Concerto at Walt Disney Concert Hall. Aileen is an avid chamber musician, having participated in chamber festivals such as the Perlman Music Program Chamber Music Workshop and Music@Menlo. She has studied with members of the Cleveland, Cavani, Guarneri, and Tokyo String Quartets. As well as received master classes from Itzhak Perlman, Ivry Gitlis, Ruggiero Ricci, and Donald Weilerstein.

As an orchestral player, she was invited to participate in the New York String Orchestra Seminar under the baton of Jaime Laredo, and served as Concertmaster of the New England Conservatory’s Symphony Orchestra. Other accolades include Artist of the Year by the Orange County Register and second place in the Alexander & Buono International String Competition. As the winner of the Culver City Symphony’s Parness Concerto Competition, Aileen was featured as a soloist with the Culver City Symphony.

Beginning her studies at the age of 4, Aileen made her orchestral solo debut at the age of 10 as the winner of the Bellflower Symphony’s Young Artists Competition. Previously, Aileen attended the Colburn Music Academy, studying with Margaret Batjer. She holds a Bachelor of Music from the New England Conservatory having studied with Soovin Kim, and will begin her Master of Music studies at the Juilliard School in the fall, studying with Joseph Lin.

Book an Online Lesson with Aileen