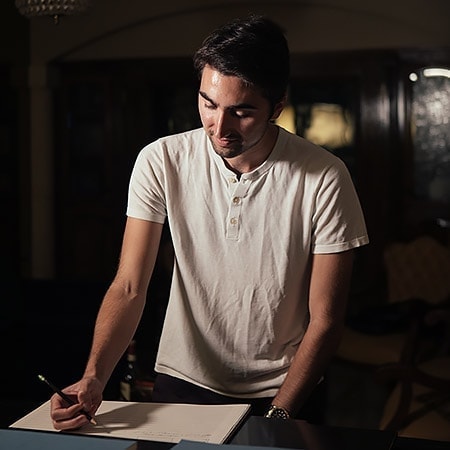 The incredible gratitude I have for the teachers in my life is what inspired me to begin teaching. As a film composer, teaching and communicating is an important component in my collaboration with film directors – and it’s through teaching various composition and piano students during my undergraduate and graduate programs that I fully realized my love for it. The most rewarding thing is seeing a student’s excitement at having learned a new skill or mastering a new concept: discovering and cultivating each and every student’s musical passion is my main goal in teaching. My undergraduate education at Kansas State University’s renowned music Education program also featured many educational components.

Growing up surrounded by Lebanese influences including orchestras, French albums by Legrand, the great scores of Desplat and Williams, and opportunities to perform plenty of classical and jazz piano, Alex W.’s unique musical tastes have led him to explore fresh avenues in writing for the screen and the stage.

Based in New York, Alex has recently completed several independent media projects, Frayed Roots (2020), Raindance Film Festival Official Selection, dir. Nay Tabbara | Kansas Theatre Works Podcast, including an original podcast production of Macbeth (2020), dir. David Mackay, prod. Jennifer Vellenga | Not Only You (2019), producer Ngoc Vuong | and is developing his musical, AN AMERICAN IN BEIRUT (which explores what it means to live in two different cultural worlds) with bookwriter SEVAN after a successful workshop production. His time at NYU Steinhardt’s Graduate Screen Scoring program has proved a powerful launching pad for his career, and he is thankful to have been a winner of the 2020 Film Scoring Award, resulting in a live orchestral performance of his score, Synced to Picture.