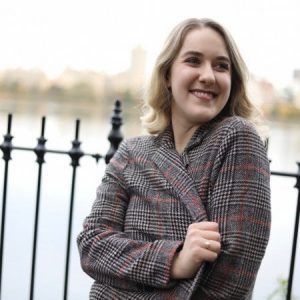 Ali F. grew up in Massachusetts where she attended the Franklin School for the Performing Arts. Her credits include the national tours of Joseph…Dreamcoat and Evita and regional productions of Legally Blonde at The LEX (Margot, u/s Elle), Puccini’s Suor Angelica with Chelsea Opera NYC (La Novizia), Newsies (Katherine), Joseph…Dreamcoat (Narrator), Little Shop of Horrors (Audrey), and more. As a teen, Ali performed with the international touring ensemble Electric Youth across the U.K., France, Italy, Austria, Slovenia, and on Royal Carribean’s Oasis of the Seas. She can be heard on their albums All Amped Up and Power Chord and is now a guest choreographer for the group. Ali has performed her solo cabaret show “I Only Wanna Laugh” at multiple venues including Don’t Tell Mama in NYC.

At Oklahoma City University’s Bass School of Music Ali studied Voice with Dr. Autumn West, coached with Jan McDaniel, and studied Piano with Professor Claudia Carroll-Phelps. She graduated with a Bachelor of Music degree in Music Theatre. At OCU, Ali performed in shows such as Hairspray (Penny), Company (April), How to Succeed in Business… (Smitty), Curtains, and Shakespeare’s Pericles (Lychorida) in addition to a classical recital featuring music by Mozart, Schubert, Satie, and Bernstein and a musical theatre recital.

Ali has shared her love of the performing arts in schools throughout New York, Massachusetts, and Oklahoma in addition to her virtual studio of students all around the world.

Book an Online Lesson with Ali