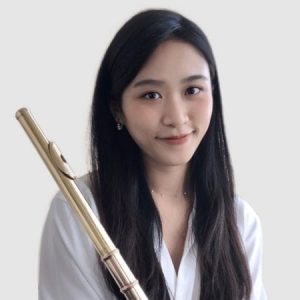 Flutist Ashley Y. is currently based in New York and has performed as a soloist and chamber musician throughout Asia, North America, and Europe. Including venues such as Weill Recital Hall at Carnegie Hall, where she made her debut as the First Prize winner of the Golden Classical Music International Competition, Bruno Walter Auditorium, Merkin Concert Hall, Congress Graz Music Hall, The Wiener Konzerthaus, Taiwan National Concert Hall, Central Conservatory of Music. An avid chamber musician, Ashley has performed with the Brooklyn Symphony Orchestra at Brooklyn Museum. She is also a member of the New York Flutists and has performed with the Miclot Chamber Music Society and Mindy Kaufman from the New York Philharmonic.

Ashley graduated from New York University with an Artist Diploma and a Master of Music degree in flute performance as a departmental scholarship recipient. She studies flute, baroque flute, and piccolo under the tutelage of renowned flutists Keith Underwood and Yoobin Son. During her time at NYU, Ashley has taught NYU undergraduate students as an Adjunct Flute Instructor and frequently performs with the NYU Orchestra, the NYU New Music Ensemble, and various chamber ensembles. She has also recorded and premiered several ensemble music in the James L. Dolan Music Studio.

Born in Taiwan and raised in Hong Kong, Ashley holds a Bachelor of Music degree in flute performance and a minor in piano performance at the National Taiwan University of Arts. Back in Taiwan, Ashley participated in various ensembles, including the Taipei Philharmonic Youth Orchestra. Her wind quintet was awarded first place in the National Taiwan Music Competition for two consecutive years. She also won numerous solo competitions, including the National Student Music Competition, Taipei Student Music Competition, and the Steinbach Music Competition. Ashley performed at events such as Gounod’s opera “Faust” and Academic Music Exchange Concert in China. The Ministry of Foreign Affairs has also invited her to perform for the President at the Taiwan National Day’s Celebration Ceremony.

Ashley has extended her passion for music performance to education since 2015. She believes every person learns and develops talents at different paces toward different goals. Therefore, she strives to help and encourage her students to find their individuality and potential in music.

Book an Online Lesson with Ashley