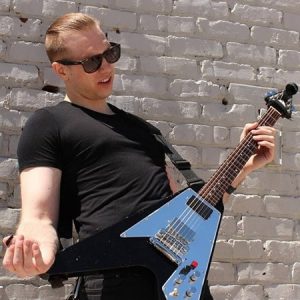 Cameron R. is a professional guitarist and musician originally from Halifax, Nova Scotia, Canada. Cameron’s skills beyond guitar playing include producing, composing and arranging and he is an experienced copyist.

Cam first picked up a guitar at the age of nine. Since the beginning, he has striven to be as versatile a musician as he can be, and his influences reflect that. They include Pat Metheny, Pantera, Metallica, Dream Theater, Animals As Leaders, Dizzy Gillespie, Chopin, The Who, John Coltrane and Periphery just to name a few.
Cameron’s earliest achievements while still living in Halifax include playing a solo guitar arrangement of the Canadian National Anthem for several thousand people at a major junior hockey game when he was 14. He performed for the Lieutenant Governor of Nova Scotia and also participated in a funk band led by Rick Waychesko, former trumpet player for Tower of Power. Cameron accompanied a professioanl musical theater production of Godspell as the sole guitarist for the first time at 18 years old. He later accompanied a production of Spring Awakening at 21.

While at Berklee, Cameron founded the Boston-based progressive metal/funk fusion band Sound Struggle. Their debut album was written and arranged soley by Cameron and the band continues to put out albums that fuze jazz and progressive metal. Sound Struggle has been featured on a number of current online progressive and metal magazines for their second release Rise, and are considered a contender in the modern metal world. In Cameron’s music, you can expect compositions that are captivating and demanding to perform, and they often make use of advanced music theory concepts. This is certainly evident in his writing for Sound Struggle.

Aside from playing guitar in a number of diverse settings, Cameron uses his skills as a music producer, composer and arranger to write cues for television and other music for Tangent Music. His compositions have been used in network shows on Fox and TBS. In addition, MGM bought one of Cameron’s compositions for their own continued use.

Cameron is now based in NYC. Almost immediately after relocating here, he began filling in as a substitute guitarist in Disney’s Aladdin on Broadway. More subbing gigs soon followed, including Wicked, Jersey Boys, and On Your Feet. After six months in NYC, Cameron was fortunate enough to be selected as the Guitar 1 Chair for the first national tour of Something Rotten, the musical which ran from January 2017 – May 2018. After returning to NYC Cameron started performing with Adam Pascal and other Broadway musicals including Chicago and Beetlejuice.

Book an Online Lesson with Cameron