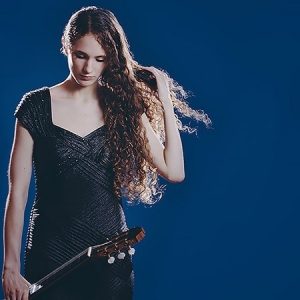 Ms. Chaconne K. burst onto the concert stage and international guitar competition world at age 14, giving solo concerts to sold-out venues and securing 14 championship titles in the world’s most prestigious international classical guitar competitions in the Junior, Senior, Collegiate and Artist Divisions. Excerpts of her solo concerts and CD recordings have been featured 11 times on American Public Media’s Performance Today and Sunday Baroque. She has also been featured on National Public Radio’s From the Top with Maestra JoAnn Falletta and the Buffalo Philharmonic Orchestra. Her performances have won the hearts of audiences throughout the United States.

On April 14, 2012, Chaconne presented the world premiere of the Guitar Concerto in A Minor by Rene Schiffer, a founding and current member of the Cleveland Baroque Orchestra’s Apollo’s Fire.

Chaconne received her Master of Music Degree in Classical Guitar Performance from the world-renowned Cleveland Institute of Music in Cleveland, Ohio in 2017 after studying with Grammy-winning guitarist Jason Vieaux. She also completed her Bachelor of Music Degree in Classical Guitar Performance in 2015 from the Cleveland Institute of Music with Mr. Vieaux. She has also studied privately with Denis Azabagic of the Chicago College of Performing Arts and Anne Waller of Northwestern University. She has performed in master classes with the most prestigious names in the classical guitar world by personal invitation, and is a three-time recipient of the “Michael and Amelia Alban Award in Guitar” from the Cleveland Institute of Music. She has also received the “Recognition of Accomplishments Award” from the Indiana State House of Representatives.

Book an Online Lesson with Chaconne