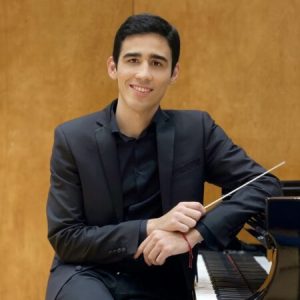 Eduardo G., Mexican born pianist and conductor recently completed his master’s degree at The Juilliard School, where he was a proud recipient of the Kovner Fellowship. Eduardo holds a Bachelor´s Degree in Piano Performance from La Escuela Superior de Musica y Danza de Monterrey. Likewise, his keen interest in entrepreneurship has led him to earn a Bachelor’s degree in Creation and Development of Businesses from the Technological Institute of Superior Studies of Monterrey (ITESM).

Since his orchestral debut as a pianist in 2016, Eduardo has performed with the The Juilliard Orchestra, UANL Symphony Orchestra, ITESM Orchestra, ESMDM Symphony and the Queretaro´s Philharmonic.

Simultaneously with his activities as a pianist, Eduardo has worked exhaustively in projects as an orchestral conductor, including the foundation of his ensemble in Monterrey, “Détaché Orchestra”, a group of young musicians who bring classical music to primary schools around the state of Nuevo Leon.

Book an Online Lesson with Eduardo