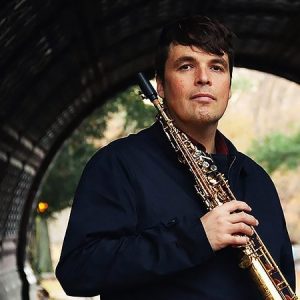 Born October 27, 1975, in Novo Mesto, Slovenia, Igor began his professional training at age 19 at the Bruckner Conservatory in Linz, Austria. During this period, he was a member of Munich-based band Sidewinders, winner of the“Best Jazz Group of Germany” award. After completing his studies with honors, Igor was invited by one of the world’s finest bassists, Reggie Workman, to study at the New School University in New York City. He received a scholarship and moved to New York in fall 2000. In April 2002, Igor was selected for the New School All-Star Wayne Shorter Ensemble, which performed at the “Beacons In Jazz” award ceremony at the Supper club, where Mr. Shorter was honored.

His band “Innertextures” represents Igor’s passion for the music to journey to new and daring places. He is supported in this effort by bassist Christopher Tordini and drummer Nasheet Waits. Igor has released four CD’s as leader:” “Eleven” (2018) and “Innertextures live” (2012) for Portuguese label Clean Feed records,“Mineral Mind” (2010) and“Innertextures” (2004).

In 2011, Igor was commisioned to create a piece for a closure of European Capital of Culture. With multimedia artist Zeljka Blaksic he created “Resistance of the Earth” which is a multimedia project that combines several artistic genres; from video, performance, 16 mm film to live music. In addition to his work as a performer and composer, he has an active career as an educator, having taught master classes and improvisation lessons throughout Europe and the United States.