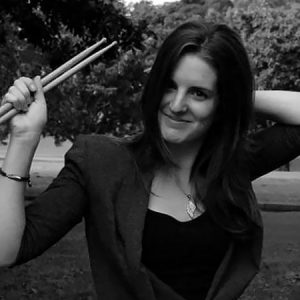 Jodie has been playing the drums for 13 years. Her music career started in high school. Her potential was already on display when she attended SIMA’s improvisation workshops for young women in 2005. During high school Jodie gained valuable experience in jazz ensemble playing at the Wollongong Conservatorium of Music. She was awarded jazz scholarships from Wollongong Conservatorium and IAJE Pan-Pacific Jazz camps.

In 2007 Jodie toured America with the Wollongong Conservatorium Jazz Orchestra. She gained more experience of the heady US Jazz scene during subsequent study in New York with world-class drummers Michael Carvin, Eric Harland, Bernard Purdie and Billy Hart. Jodie has played with many acclaimed Australian jazz/contemporary musicians including James Muller, James Morrison, Dale Barlow, Katie Noonan, Bobby Gebert, Carl Dewhurst, Craig Scott and Matt McMahon.She graduated from the Sydney Conservatorium of Music in 2012 with a Bachelor of Music, (Performance), Jazz. She continues to further her career in Australia and overseas, returning to New York during 2013, 2014 and 2017 for further study.

Jodie is the recipient of the 2013 Jann Rutherford Memorial Award. She was also featured in the esteemed Australian publication Sydney Morning Herald, within the supplementary magazine “The Next Big Things” March 2013.

Jodie was also the drummer supporting acclaimed US musicians Camille Thurman and Mimi Jones during their headlining performance at the Sydney International Women’s Jazz Festival in 2015. In Fall 2018, Jodie was accepted into Berklee College of Music’s Global Jazz Masters program, mentored by Danilo Pérez and Marco Pignataro. In October 2018, with Perez and a group from the Global Jazz Institute, she partook in a tour to New Orleans, performing at Snug Harbour and working within the educational community at the University of New Orleans.

Book an Online Lesson with Jodie