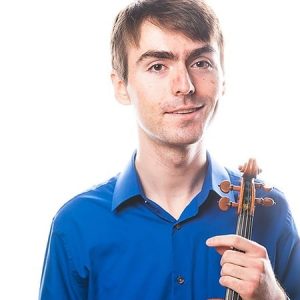 Joe is a passionate teacher and performer. He is especially interested in teaching and pedagogy, and has taken courses in String Pedagogy and Chamber Music Pedagogy at New England Conservatory. He has experience teaching and tutoring a range of musical subjects, including private violin teaching; tutoring in music theory, ear training, conducting, and orchestration; classes in general music and choir; and chamber music coaching. Joe is comfortable working with students of any age and level of experience, and he believes strongly in the value of music education for everyone. His choices of repertoire and teaching style are customized to each student’s needs, goals, and interests.

Joe is also passionate about community engagement. He participated in the Gluck Fellows Program, giving performances and presentations at a variety of locations such as assisted living homes, hospitals, and libraries. He also participated in USC Thornton Outreach’s Meet the Instruments program, introducing the violin to students in local schools. Other community performances and presentations in LA included the Midnight Mission in Skid Row, Hollenbeck Palms Continuing Care Retirement, and Youth Orchestra LA at Heart of LA. Joe also participated in the first season of the Britt Festival’s Fellowship program, which included performances with the Britt Orchestra as well as chamber music performances at a local library, VA center, and community centers.

Joe has a wide range of musical interests. As an avid performer of early music, he has performed with the Harvard Baroque Chamber Orchestra and will be studying at Juilliard’s graduate Historical Performance program as a Baroque violinist. He also plays the viola and has performed as a violist with the Fenimore String Quartet. He has sung in several choirs, including the Back Bay Chorale in Boston. He also has experience with choral and orchestral conducting, and has studied conducting at the Atlantic Music Festival as well as serving as Music Director of the Concerto Chamber Orchestra at USC. These other musical experiences help inform his overall approach to music and teaching.

Book an Online Lesson with Joe