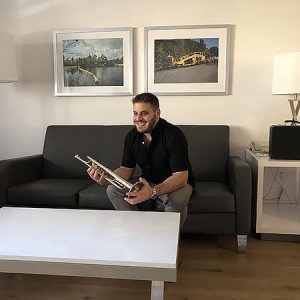 Joe P. performer, composer, and educator, has always pushed for musical excellence. In May 2008, Joe earned his Bachelor of Music degree in Trumpet Performance from the world-renowned music school, Berklee College of Music in Boston, MA.

Years later, his talent has taken him far. His extensive performance career leads him into performing at some of the best concert halls, theatres, and clubs around the country.

Joe played 2nd trumpet in The 1st National Broadway Tour of Woody Allen’s Bullets Over Broadway. The show ran from October 2015 to July 2016 with performances throughout the country. He recently played the 2017 tour of Elf: The Musical which performed at The Princess of Whales Theatre Toronto, The Wang Theatre Boston, and Madison Square Garden in New York City.

The hard working Boston native stays busy with gigs, composing original music, and sessions around NYC, particularly in the jazz scene. Joe’s reputation as a jazz trumpet player has also led him to playing with well-known artists such as The Temptations, Grammy Award winning – Morgan Heritage, Damian Marley, The Happenings, and legendary TV star, Vicky Lewis. His original music can also be heard in an upcoming short film, Musicians & Magicians, due out in early 2018.

Joe has also transcribed many jazz artists’ solos, one which is featured in a Bugles Media Publications Book called The Improvisation Style of Jim Rotondi By: Eric Siereveld.

Book an Online Lesson with Joe