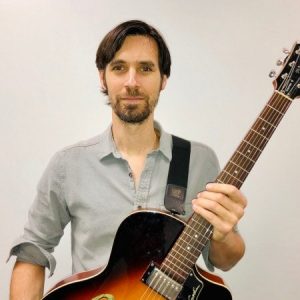 In 2019 he was the guitarist of Gabriel Alegria’s Afro Peruvian Jazz sextet and played at WBGO jazz radio station in a live streaming show.

He also performed at the New Jersey city Jazz festival with the same sextet.

In 2018 Juan toured with the same band in Peru, South America playing in different Jazz venues and teaching master classes in Music colleges.

In 2017 he joined the NJCU Jazz big band as the guitarist and had the opportunity to play at the prestigious Jazz club “Trumpets” in New Jersey and “The Zinc Bar” in NYC.

In 2012 he was the lead guitarist and song writer of the band BLUE SOUR (an original pop rock band) that was selected as the band of the month in the Australian music Magazine Whotune. The rights of the songs were bought and used for the Facebook game Rock Star Rising. He toured with the band until 2015 playing in different stages in the east coast and clubs in NYC (Red Lion, Prohibition, Bitter End, Session 73, Pianos, among others).

Juan has recorded for different artists in NYC. He was the guitarist of Martin del Carpio’s (an alternative music song writer) Goddard album. Also recorded lead guitars for the pop rock band Men or Myth and their singles. He was a guest artist in John Roccesano’s album Johnny Rock and Friends for the record. He is currently playing live shows as the lead guitarist for David Rudick’s Eminence project in NYC.

Juan has been a guitar teacher for more than 10 years and has had the experience to play different styles and genres in the NYC scene.

Book an Online Lesson with Juan