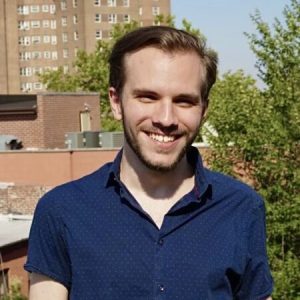 Keith S. is a multidisciplinary musician from central Massachusetts specializing in Trombone and Vocal performance.

He attended the Hartt School in Connecticut, focusing on classical Trombone, playing as principal Trombone in the Hartt Symphony Band, Wind Ensemble, and Orchestra, as well as with a local swing ensemble called the Al Fenton Big Band. At the same time, he traveled with the Connecticut Choral Union Touring Choir, singing as a Baritone, to Hungary and the Czech Republic, and sang as a section leader at First Congregational in Suffield. He co-wrote and music directed an original musical titled, “Writing in Pencil”, premiering in April of 2018, and writing a two-movement piece for brass quintet and organ titled “Palms” in 2019.

Now based in New York City, Keith has recently accepted a Baritone position in Choral Chameleon, a new music ensemble, as well as a position at First Presbyterian in Manhattan. Keith is fluent and experienced in various art styles and genres, including classical and musical theater. He is a seasoned sight-reader and composer; he’s written music for NYU short films and short theater productions, all in varying styles of classical, musical theater, rock, and electronic. His pursuit of musical versatility will soon lead him to touring throughout New England and parts of the Midwest, as well as Washington state to premiere his newest piece, “Boxes”, an organ solo.

Keith currently resides in Brooklyn with his partner of three years. They both enjoy traveling, cooking, and getting way too competitive at every board game they come across.

Book an Online Lesson with Keith