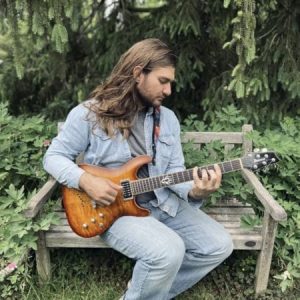 Lonnie is a New Jersey-born guitar and bass teacher, composer and singer-songwriter with experience teaching, performing and composing a wide variety of music. He draws upon an eclectic music education to assist students in finding a connection with their instrument through music that they love. As a film composer and producer, his music has been featured in major ad campaigns (Tide, Wells Fargo). As a performer, he has experience in rock, classical, medieval, folk, metal, and electronic music, and is currently working on an album of songs that draw from these styles. During his undergraduate years at the Peabody Conservatory of Johns Hopkins University, Lonnie gained experience composing for a variety of ensembles including string quartet, bass septet, and mixed vocal and instrumental ensemble. In addition to being exposed to contemporary classical music, a core music history course sparked an interest in medieval and renaissance music, leading him to play harp and sing with the Peabody Renaissance ensemble for several years. Outside of school he attended numerous shows in Baltimore’s vibrant underground music scene, collaborating with dancers, film makers and Dj’s as instrumentalist and composer. A longstanding interest in Indian classical music lead him to study sitar in Silver Spring, Maryland for one year. As a baritone,  he performed with the Peabody-Hopkins Choir and the Baltimore Symphony Orchestra at Carnegie Hall in 2011 under the direction of conductor Marin Alsop. After graduating he sang professionally in the Baltimore Choral Arts Society symphonic chorus, performing repertoire such as Beethoven’s Ninth Symphony and Carmina Burana with the Baltimore Symphony. In 2017 he was accepted into the Film Scoring Master’s program at NYU, a fast-paced program including extensive training in orchestration, conducting, recording and producing. Drawing upon twenty years as a guitar player he contributed as a guitarist, bassist, mandolinist, singer, harpist, and sitarist on his own film scores as well as those of his classmates. Following industry formatting standards he composed an orchestral piece that was recorded remotely by a session orchestra in Prague in 2018. It was during his final year of his master’s that he took over the teaching studio of one of his fellow composers at a local music shop. This afforded him an opportunity to pass on some of the musical knowledge he had gained over a life of musical study. In addition to providing a core curriculum of note reading, tablature, and music theory, he helped his students explore genres such as American folk, blues, disco, funk, jazz, rock, hiphop, pop and metal. Upon graduation from NYU he landed an internship at a very busy music production house in Greenpoint, Brooklyn, where he assisted in cataloging music, engineering recording sessions, booking session musicians, and composing commercial jingles, some of which made it to air. Throughout the trials of 2020 and 2021 he continued composing and teaching remotely, and has now returned to teaching lessons in-person in Brooklyn and Manhattan.

Book an Online Lesson with Lonnie