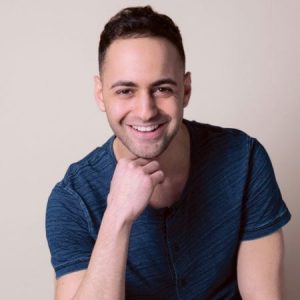 Louis is a NYC based singer, songwriter, performer, and music teacher. He is originally from Cyprus where he had his music training in piano and voice with Grade 8 Diplomas in Voice and Piano from the Associated Board of Royal Schools of Music.

Louis moved to the United States where he pursued a degree in Musical Theatre participating as a lead in musical productions in Chicago. He also participated and performed at the Musical Theatre program at the School at Jacob’s Pillow directed by Chet Walker.

For the last three years, Louis has been the lead singer of the Pancyprian Association of NY, a non profit organization performing in various venues in the city and New Jersey. He is also a lead singer/actor of the Cyprus New York Productions where he performed at the New York Athletic Club for the Ronald McDonald House.

Louis is also an independent recording artist, producing his own music that is released under his stage name, Louis Bluehart.

Aside from performing, Louis has been a music teacher for Piano and Voice. For the last four years, Louis has been teaching throughout the city in person, his home studio, and online to students of all ages. Louis combines his passion for music and great energy to make the lessons unique and a great experience for you.

Book an Online Lesson with Louis