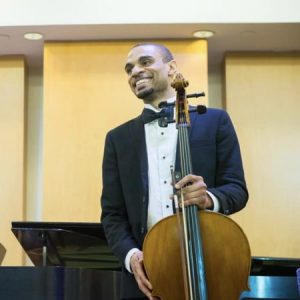 New York City-based cellist, Michael B. has gained popularity for his performances from coast to coast in the United States and overseas.  One of his memorable accomplishments was being a First Prize winner of the Classical Music Competition for the Charleston International Music Competition in February 2021.

Throughout his musical career, Michael has “accumulated an impressive list of accomplishments” – Deborah Walker of I am Nyack.  With appearances on the Three Angels Broadcasting Network, Queens Public Television and on stage at Lincoln Center, Michael has engaged a broad spectrum of audiences through his art.  In addition to performing, Michael enjoys teaching cello classes in-person and online.  His most recent position was being a Cello Instructor at Peace Music Academy in Khon Kaen, Thailand for over a year in 2021.

Michael is also a member of the traveling orchestra and choir, The SymphoNYChorus (TSC), under the leadership of Director Henric Ideström.  In TSC, Michael plays cello and sings bass in the choir.  This allows him to share his art through various musical genres including, classical, gospel, and contemporary music in concert.  In the summer of 2019, Michael joined TSC on their trip to the United Kingdom, where he performed in several cities in England.

Currently, Michael is teaching cello and beginner piano classes.  Michael is also pursuing his certification in Suzuki Cello with teacher trainer, Pamela Devenport.  He received his Bachelor of Music degree in Cello Performance at Nyack College in Manhattan, where he studied with Byung Kook-Kwak, Dr. Michael Katz, Sujin Park, and Dr. Marta Bedkowska-Reilly.

Book an Online Lesson with Michael