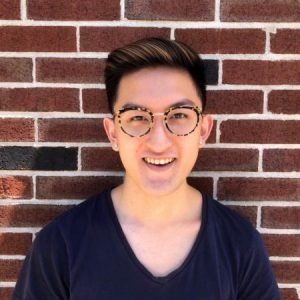 Nicholas T. is a composer, pianist, and music educator whose music is described as “showy as peacocks” (The Strad). He is a first-generation, Vietnamese-American musician who began his musical studies in sixth grade. He was named a National QuestBridge Scholar in 2015, where he enrolled at Swarthmore College, studying with Gerald Levinson and Laurie Ticehurst. When Nicholas transferred to the Boston Conservatory, he studied piano with concert pianist Carlos Vargas and composers Marti Epstein, Curtis Hughes, and Tina Tallon. Currently, Nicholas is pursuing his PhD in music composition at the Graduate Center, City University of New York, where he is studying with Jason Eckardt and holds the Graduate Center Fellowship.
Fiercely committed to education, Nicholas completed the 2020 Keep Composers Weird residency in Austin, Texas where he appeared as a guest lecturer at Dobby Middle School. That same year, Nicholas created a special music program for students with learning disabilities in Boston, and also put together a peace-building education project centered around the music of Earl Kim.
In 2021, Nicholas won the Boston Musica Viva “Write it Now!” commission and will have a chamber piano concerto premiered in 2022. In 2020, Nicholas won the National Sawdust New Works Commission and wrote for the JACK Quartet. He has also been commissioned by Margins Guitar Collective, and has received recognition from Loadbang (2020) and Juventas (2019).
As a performer, Nicholas has performed classic works by Rachmaninoff, Beethoven, Chopin, and Debussy. However, he is also a tireless advocate for contemporary music and has performed pieces by Steve Reich, Phillip Glass, Unsuk Chin, Toro Takemitsu, Pauline Oliveros, John Cage, and more.
Nicholas believes that music education should be holistic—engaging the physical, emotional, and, most importantly, community aspects of the vibrant arts world.

Book an Online Lesson with Nicholas