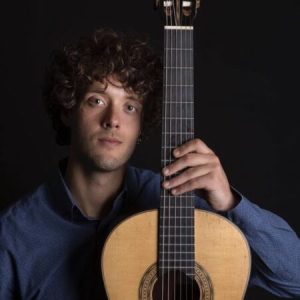 Paul S. is from Williamston North Carolina, USA. He began Classical Guitar studies at 12 years old in order to go to music school since there was only a classical program. He went to University of North Carolina School of the Arts (high school program) for 4 years and studied classical guitar with University students as well from the ages of 14 – 18; until 2015.  He decided to attend Cleveland Institute of Music and study with GRAMMY Award Winner Jason Vieaux, and Colin Davin for the start of his Bachelor’s Degree. After two years in 2017 he transferred to Conservatorium van Amsterdam to study with Johannes Moller and after that Gabriel Bianco (both at CvA). Finally after graduating from Conservatorium van Amsterdam in 2020 Paul was accepted to Conservatorium Maastricht to study his Master’s Degree with Carlo Marchione. In August of 2022, Paul graduated with his Master’s Degree in Classical Guitar Performance. He graduated with Honors and received a mark of 9.5/10.

Paul has just moved to Brooklyn, NY from living, teaching and studying in the Netherlands, in search of performance and teaching opportunities. He is starting to zero in on combining classical contemporary music with improvisation using the median of jazz, which he is well versed in. He is also attempting to fuse his knowledge of both classical guitar and jazz guitar. The techniques of classical guitar will help him with improvising in certain styles and being able to freely express mixed emotions by interchanging styles. He has played in many concerts in Crawford Hall, Watson Hall, Mixon Hall and Sweelinck Hall. Paul has also performed in many venues outside of schools. For example: Oosterkerk, Westerkerk, Martin County Community Center, and various churches in the Cleveland, Ohio area. He also has performed in many ensembles, like a jazz trio, classical guitar trio, classical guitar quartet, and jazz big band in concert halls and churches mainly in the North Carolina and Ohio area. Paul has also competed in many competitions such as the Antwerpen Gitaar Competition, Twents Guitar Competition, Koblenz Guitar Competition, Stroud Guitar Competition and the Eastern Carolina University Competition.

Book an Online Lesson with Paul