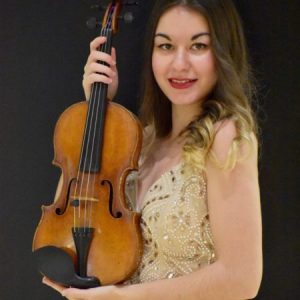 Rafailia K. was born in 1998 in Thessaloniki, Greece. She started learning to play the violin at the age of 6, under the tutelage of the concertmaster of Thessaloniki State Symphony Orchestra and graduate from the Royal Academy of Music in London, Omiros Yiavroumis. She participated in numerous masterclasses in Europe and Russia, where she was improving her skills and has attended summer workshops. Rafailia received the Greek National Diploma-Certificate in violin performance in Thessaloniki at the age of 16 with first prize. In August 2016, she moved to Charlotte, North Carolina and attended the Hayes School of Music for a degree in violin performance, studying under Professor Nancy Bargerstock.  She studied for a little while with violinist Janet Sung in DePaul School of Music in Chicago. In 2016 she was awarded the Hayes Young Artist, which is a four-year scholarship.

Rafailia has appeared as a recitalist, and was appointed assistant concertmaster as a sophomore with the Appalachian Symphony Orchestra and principal second violin in the Appalachian Opera Orchestra. She also participates in Baroque Ensembles in the Hayes School of Music and has acted as first violinist of her string quartet for the past three years. Her past public appearances include performances with the Thessaloniki State Symphony Orchestra and MOUSA in Greece, as well as the Aristotle Symphony Orchestra. She has also performed side-by-side with the North Carolina Symphony in December 2018 as principal second violin.

In the summer of 2017, she attended the violin festival Mountaintop Mastercourse in New York and studied with David Russell. She also participated in masterclasses with Steven and Larissa Elisha, and attended a series of masterclasses with Rachel Burton Pine in Atlanta. Since October 2017, Rafailia has been performing with the Johnson City Symphony Orchestra in Tennessee as a first violinist as well as first violinist with the Western Piedmont Symphony Orchestra in Hickory. She has been an active member of the American String Teachers Association since 2016 and she has been attending conferences in various states. Rafailia has also attended the famous festival in Northern Europe, Alion Baltic International Music Festival in Estonia the summer of 2018 and studied with scholarship and excellence under the tutelage of the internationally acclaimed violinists Albert Markov, Sergei Stadler, Stanislav Pronin, Anastasia Kozlova, Ivry Gitlis and Alissa Margulis and several other Russian-American teachers.

Rafailia is performing as a recitalist around Europe and US as well as in her hometown, Greece. She is currently giving recitals in New York City in Opera America Center and Tenri Cultural Center. She currently studies with Dr. Nancy E. Bargerstock.  She currently plays on an Italian violin 1870, loan from her teacher until 2020.

Book an Online Lesson with Rafailia