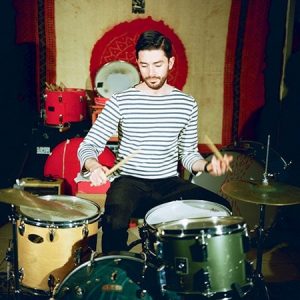 Born in New Haven, Connecticut, Tim M. had music in his life from the earliest and most formative days. Studying classical piano from age 5-15 with Yale School of Music staff, Tim made the natural transition to the drum chair in his high school band. After discovering Elvin Jones via John Coltrane, Tim became obsessed, quit the football team, and attended the Berklee College of Music summer performance program.

Tim followed his calling to New York City in the fall of 2002, where he studied jazz drums at The New School for Jazz and Contemporary Music. While there, Tim found his calling in the arena of avant-garde improvisation, studying intensely with Gerry Hemingway and Reggie Workman, while simultaneously swinging harder and harder under the guidance of Kenny Washington and Billy Hart.

Tenures in the Middle Eastern jazz and Brazilian/African ensembles at New School made Tim a perfect fit for Golem, the klezmer-punk band that would advance to critical acclaim and tour the world with his addition as drummer. Tim has performed and recorded heavily for over 12 years in the Brooklyn indie-rock and indie-folk scene, notably with The Walkmen, Relations, Deva Mahal, Old Time Relijun, Brute Force, J.A.C.K., Christy & Emily, and Bevy, among many other groups. He specializes in applying jazz’s inherent creativity and flexibility to other musical contexts, as well as practicing and ultimately recording with a click-track.