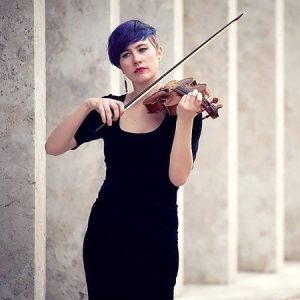 Ula K. is a Brooklyn based baroque violinist who performs regularly as a soloist and a member of many prominent groups throughout the US and Europe. They have toured extensively, played live for WQXR and BBC Radio 3 broadcasts and performed in many international music festivals, including Boston Early Music Festival, Bachfest Leipzig and Lucerne Festival. Last year they performed on Broadway for the award-winning ‘Farinelli and the King’ production.

Ula is an alumnum of the Juilliard School and the Royal Academy of Music (London), specializing in Historical Performance. Through the last few years they had the pleasure to work with some of the most notable musicians in the early music world, including Masaaki Suzuki, Rachel Podger, William Christie, Laurence Cummings, Lars Ulrik Mortensen, Ton Koopman, Richard Egarr, Nicholas McGegan, Nicolette Moonen, Robert Mealy, Cynthia Roberts, Elizabeth Blumenstock and Stephen Stubbs, among many others.