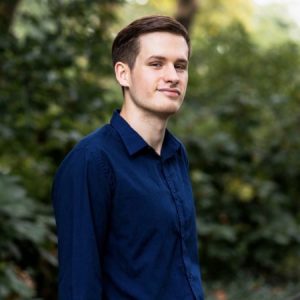 Will H. is currently in his first year as a M.M. Percussion Performance major at The Juilliard School, where he studies with Gregory Zuber, Markus Rhoten, and Daniel Druckman. Will graduated with a B.M from Manhattan School of Music in May 2021, where he studied with Christopher Lamb, Duncan Patton, She-e Wu, Kyle Zerna, and John Riley. He is a recipient of the Avedis Zildjian Percussion Scholarship.

A native of Dallas, Texas, Will began studying drum set at 10 years old, and became classically focused upon entering high school. From 2015 to 2017 he served as Principal Timpanist of the Greater Dallas Youth Orchestra, to which he owes his passion for classical music.

Will has had significant experience performing contemporary music in small ensemble settings, and performs regularly with AXIOM, New Juilliard Ensemble and Juilliard Percussion Ensemble. He was a featured soloist on Mark Applebaum’s Straitjacket with the Manhattan School of Music Percussion Ensemble, and has premiered multiple works by former co-directors Jude Traxler and Mike Perdue. He has also premiered numerous works by student composers, and has appeared alongside Tactus Contemporary Ensemble as a guest percussionist. He has studied and worked with Steven Mackey, Steven Schick, Andy Akiho, Sandbox Percussion, Simon Boyar, sound painting with Walter Thompson, Todd Meehan and Thomas Burritt, and was a featured soloist in 2017 with Plano West Percussion, performing Marimba Spiritual by Minoru Miki.

Aside from music, Will can often be found playing chess, reading books, or drinking coffee.

Book an Online Lesson with Will