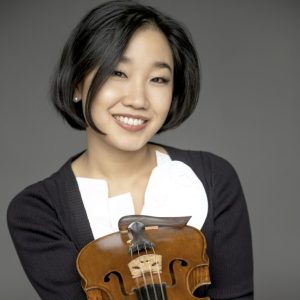 Violinist Yezu W. made her debut at Carnegie Hall in 2004, where she became the youngest performer to play all 24 of Paganini’s Caprices for solo violin. Since then, she has been invited to perform at the United Nations and traveled extensively for performances at Lincoln Center, Smetana Hall, Musikverein, Berliner Philharmonie, and Elbphilharmonie Hamburg, amongst others. Her awards include “Outstanding International Musician of the Year” (2002) by the Arts Critics Association and “Artist of the Year” (2005) by the Gangwon Talent Support Foundation of Korea.

Yezu was a recipient of the prestigious Fulbright Scholarship (‘19-20) and pursued her project ‘Discovering Isang Yun and his World’ in Berlin, as well as being a member of Ensemble Modern Academy in Frankfurt. Yezu co-founded Shattered Glass, a conductor-less string ensemble in NYC, and is currently the Artistic Director of NY in Chuncheon Music Festival in her Korean hometown of Chuncheon, where she was appointed Honorary Ambassador to the city.

Yezu recorded for EMI Classics Korea and MOOK sound, and has enjoyed collaborating with other genres such as Hip-hop and Korean traditional music. She has also had a rare chance to perform with the Pyongyang Symphony Orchestra in North Korea in 2008. Born in Freiburg, Germany, Yezu was brought up in Korea until the age of 10, when she moved to the U.S. to study with Albert Markov. She received her degrees from Manhattan School of Music, The Juilliard School, Bard Conservatory, and recently completed her Doctorate Degree at the Stony Brook University. Her principal teachers include Albert Markov, Catherine Cho, Laurie Smukler, Arnaud Sussmann and the members of the Emerson Quartet.

Book an Online Lesson with Yezu