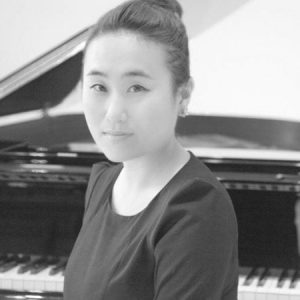 Combining her strong background in classical and jazz, Yoonah O. brings a fresh perspective to her music.

Born in Seoul, South Korea, Yoonah grew up in a musical family and completed her undergraduate degree in classical composition major at Hanyang University. When she was 16 years old, Yoonah won the 2nd prize at Seoul CCM (Contemporary Christian Music) contest and, shortly after, she began participating in numerous music albums as a session musician, as an arranger, and as a chorus singer. During her college years, Yoonah began to invest her time to explore different styles of music and did not limit herself to classical music, the field of her major. She also participated in numerous Korean Pop (K-POP) albums as a piano/keyboard session musician and as an orchestra arranger. Her contributions included successful albums of some of the most renowned Korean singers, including Kyuchan Cho, So Eun Lee, Woo Won, and Ash.

Yoonah has written numerous popular songs. “With All My Heart”, one of her ballads, won the grand first place in the prestigious Jae Ha Yoo Song Festival. Yoonah’s love and passion for music did not stop there. She wanted to creatively intertwine different styles of music, particularly with Jazz.

After receiving a B.M. degree from Hanyang University in 2007, Yoonah moved to the USA to study Jazz at Berklee College of Music. She was honored with the entrance award, the Berklee North America Scholarship. At Berklee, she earned a diploma in Jazz Composition and Piano Performance (Cum Laude). She learned from and worked with famous figures, including Joanne Brackeen, Hal Crook, Tim Ray, Jetro da Silva, Scott Free, Bob Pilkington, Greg Hopkins, and Jeff Garlindo. By working with these experienced musicians, Yoonah’s music grew immensely in a short period of time. Her musical talents and endless efforts earned her the Piano Department Achievement Award, CJ Foundation Scholarship and the Berklee Achievement Scholarship as a student. Another highlight among all the recognitions she received as a gifted musician was being given the opportunity to have a concert at Berklee Performance Center, a venue open to only a few talented musicians.

Yoonah’s musical journey continued outside the school. She quickly became one of the most in demand pianists in the New England area, owing to her versatility on various styles of music, including Jazz, Funk, Gospel, R&B, Pop, Rock and Classical music. In 2010, she became an integral part of Streets Band, with whom she performed across the New England and eastern area.

Yoonah has extensive recording experiences and more albums are to be released in the near future. For one of her recent works, Grace sings Grace, Grain Offering she collaborated – as a composer, an arranger, a performer – with Mr. Tally Sherwood, a Grammy Award Winner.

Yoonah’s performing grounds include Jazz clubs, concerts and conferences across the country.

Book an Online Lesson with Yonah