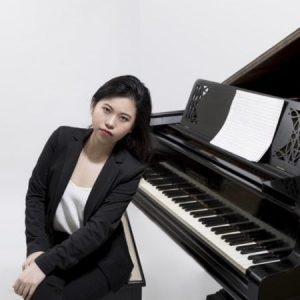 “An Amazing Talent” — The Skope Magazine.  Born in Shanghai in 1986, Zhihua H. started to learn piano at the age of 5 and composition at 10. She got her Bachelor Degree and her first Master Degree from Shanghai Conservatory of Music, then she received her second Master Degree from Manhattan School of Music where she studied with composer Reiko Füting and pianist Kayoung An. Zhihua’s music has been performed in Europe, America and Asia. Her compositions and piano performances appeared in many important venues such as Carnegie Hall, Lincoln Center, Merkin Concert Hall, OPERA America, Shanghai Concert Hall, United Nations and the United States Capitol.  On July 9th of 2018, Zhihua successfully debuted “Music of Zhihua – An Evening of Ensemble and Piano Compositions” with a number of other well-known artists from different countries at Carnegie Hall. Her 8 ensemble and piano compositions were presented in the concert and most works featured her creative composing techniques: Chinese Nine Tone Scale, Compression Rhythm, and Cubism in Music. Her two albums Music of Zhihua H. (2018) and From China, Asia to the West (2019) both won the Global Music Awards — Silver Metal Outstanding Achievement. In addition, From China, Asia to the West was awarded as “Top Album Fall 2019” by Global Music Awards. As a composer and pianist, Zhihua and her music has been interviewed and reported by many major news media, such as Xinhua News Agency, Sohu News, China Daily, Global Times, China Press, World Journal, Skope Magazine, New Music USA, Sino TV, Sino Vision, New York Lounge, Broadway World, I Care if You Listen, New York Chinese Radio Network, and so on.

Book an Online Lesson with Zhihua