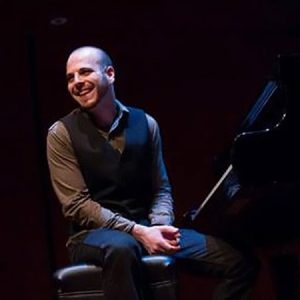 Described as “The real deal” by All About Jazz, and “a sensational pianist, and brilliant musician” by the Buffalo News, pianist Adam K. is making a strong name for himself in the music world. Originally from the north suburbs of Chicago, Adam grew up listening to all kinds of music, and fostered a love for playing piano at an early age. When he was eighteen-years-old, he moved to New York City to study at the Manhattan School of Music from which he graduated in 2011. While there he was extremely fortunate to be mentored by modern jazz piano icons Jason Moran and Vijay Iyer.

Adam’s progressive rock/jazz trio, KROM, turned heads with their debut album “Youngblood” on ZOHO Records in 2012. This album, which was produced by GRAMMY-winning pianist Arturo O’Farrill, reached number fourteen on the College Music Journal radio charts and was widely acclaimed by critics. It was picked as one of the Top Ten CDs of 2012 by the Philadelphia Inquirer, named the Debut Album of the Year by Nippertown Magazine, and hailed as “one of the most captivating discs by a jazz trio in years” by the Toledo Blade. 2014 saw the release of KROM’s second album (self-titled), which was also lauded by critics and received a 3.5 star review in Downbeat Magazine.

Aside from KROM, Adam is also the current touring keyboardist with Columbia Records’ pop singer Phoebe Ryan (​www.phoeberyanofficial.com​). With Phoebe, Adam has toured the United States as an opening act for artists such as Charlie Puth, Tove Lo, Capital Cities, and more. They have also performed at some of the nation’s largest music festivals such as the Billboard Hot 100 Festival, Bonnaroo Music and Arts Festival, and Firefly Music Festival. Further, Adam is a co-founder of the Genesis Piano Project. This project is a duo dedicated to performing the music of the progressive rock band Genesis on two grand pianos. They have toured Europe three times selling out theaters and concert halls, and have also performed at the Schiolife Festival which has featured prog luminaries such as Rick Wakeman (of the band Yes) as well as Genesis’ own Steve Hackett.

In addition to performing, Adam is an active educator and composer. In 2013 he was commissioned to write a piece for New York’s Symphony Space’s resident big band, the Afro-Latin Jazz Alliance for their New Music concert series. Other compositions of Adam’s have appeared on NBC’ ​The Voice​ and NPR’s ​All Things Considered.​ As a teacher, Adam has given music theory lectures at Brooklyn College, and has also toured the United States putting on clinics and masterclasses for high school and college music students. He currently runs his own private piano studio in Manhattan as well as being a Music To Your Home teaching artist.

“His skilled and explosive technique glides from side to side on the keys of the piano as he aptly borrows from the chambers of his conservatory-training to inexhaustibly excel on [his] mind-altering compositions​” – Rob Young, Urbanflux

“Adam is the real deal and, as he develops into a seasoned veteran, he’ll be one worth watching.”​ – All About Jazz

“Not only does Adam possess the technical skill and fluidity of a conservatory-trained pianist, but he also has a much rarer skill – he is a creative and unique voice.” ​– Arturo O’Farrill, multi-GRAMMY-winning Jazz Pianist

“Adam is an adventurous spirit on the piano. He’s not afraid to tap various histories of music: whether it’s his original compositions, Thelonious Monk, or Genesis. He demands my attention when his hands are at the piano.” – ​Jason Moran, Blue Note Recording Artist, MacArthur Fellow